One of three carvings that were located inside the walling of the Ball Cross hillfort during excavations here in the early 1950s by J. Stanley. (1954)  Each carving is distinctly unlike the other in design (see Ball Cross 1 and Ball Cross 3) and it’s highly probable that they were incorporated into the Iron Age structure with their original mythic functions—of neolithic or Bronze Age origin—disused. It is not unlikely that this and its compatriots were originally found in association with the nearby prehistoric tombs.

The broken piece of rock consists of a broken section of an almost archetypal ‘cup-and-ring’—although with this design, no central ‘cup’ occurs: a pattern found at several other multiple-ring stones, like the Grey Stone near Leeds.  Although Stan Beckensall (1999) described this to have “8 concentric rings”, his drawing and the photo here by Dean Thom, clearly show only seven such ‘rings’.  The carving presently lives in a protective box in Sheffield Museum (though beware the listing they give of the designs, as some are incorrect).

Acknowledgements:  HUGE thanks to Dean Thom for the use of his photo, plus helpful references on this site.

This is another carving (one of three here) that was removed from its landscape setting when found during excavations of the Iron Age hillfort of Ball Cross in the 1950s, and then placed into a box in Sheffield Museum, decontextualizing it and leaving future researchers slightly in the dark as to its possible nature.  In removing the carving from its site, the stone was left with additional scratches and grooves slightly damaging the stone.  Not good!

Although unlike the Ball Cross 2 and 3 carvings, the design here is structurally very similar to that found east of Gardoms Edge, with this one comprising of a large unbroken carved oval, with at least twelve cup-marks inside.  Or as Beckensall (1999) described, it “has 12 cups inside a flattened ring.”  Again, like the Gardoms Edge carving, a single cup-mark was etched outside of the enclosed ring. It was found with its companion carvings built into the main walled structure of the hillfort.  It’s unlikely that the stones date from the same age as the hillfort: more probable that they were re-used in the structure, with their mythic nature perhaps already long forgotten…

Acknowledgements:  HUGE thanks to Dean Thom for the use of his photo, plus helpful data on this site.

This carving is one of two cup-and-ring stones that were removed from this area and transported to Sheffield Museum, decontextualizing them from their landscape presence (this should not be done unless very severe damage is happening, or their destruction is imminent).  It’s quite an intriguing carving, similar in design to one found not far away at Great Hucklow, the Middleton Moor 479 carving, etc.  Like many Pennine cup-and-ring stones, it was located in a prehistoric cairn field (or necropolis), with hut circles not far away too, and really should have remained in situ for the benefit of future researchers.

The carving was cut into one end of a small rock and comprises of a singular unbroken, large oval, within which are enclosed thirteen or fourteen cups, plus a single cup on the outside of the ring.  Lunar associations may be invoked by the 13 cups, enclosed within one cycle of the year.  But I’m speculating of course.  It’s probable that other carvings in the area remained undiscovered.

Acknowledgements:  HUGE thanks to Dean Thom for the use of his photo here.

Park up at Cut Throat bridge on the A57 or alternatively  at the huge parking area that’s signposted a little further uphill. Either way, the easiest access point is at Cut Throat Bridge – though be aware the route between the two areas is the narrow grassy verge of the road: take care, kids and dogs on a very short rein!  There are many ways to access the circle but I’ll deal with only two here: one, a scramble up the steep bank of the edge; and the other, a longer route which takes in a quite a steep path, but is much easier than the first option if you’re not up for a scramble!

Route 1: The shorter scrambly route – Climb the stile into the wooded area & follow the path till your out of the wood, carry on for another 100 metres then head to your left & up the banking.  The circle is thereabouts 40 metres onto the moor in the grassland, not the heather.

Route 2: The longer way but following a relatively easy path – Access the moor via the stile and just follow the path for around ½-mile till it veers to the left at Jarvis Clough & takes a steep route uphill.  You then need to head left along the edge for around ¼-mile till you see the circle off to your right in the grassland.

Don’t let the bastardization of this site’s name fool you!  The seven stones actually number between 9 and 24, depending on the season and the growth around them.  They’re laid out in a rough free standing circle around 15.5 metres in diameter.

One of the largest stones to the SW is said to mimic the profile of Lose Hill — which it does sort of if you have a vivid imagination.  But it’s not half as close as the top of the stone matches the profile of Lose hill off to your right.  It is a complete coincidence of course.  The stone has suffered much weathering over the millennia and I’m in no doubt it wasn’t an intended original feature. (see pic, right)

Previously, and at some time  preceding the 1992 excavations at the site by John Barnatt, the circle was “tampered” with, leading to a thorough investigation that unearthed several more buried stones, one of which was re-erected.

All in all a fantastically preserved circle and one of the best examples in Derbyshire that’s well worth the effort of a visit.  Watch the weather though; as on all but one of my visits I’ve been drenched!.  The “wow” factor of this site however, makes that a small price to pay for such an awe-inspiring excursion.  With Win Hill and Lose hill looming large to the southwest, Stanage Edge off to the southeast and the great outcrop of Ladybower Tor with it’s rock art to the west, this circle has some of the best scenery of any the circles in Derbyshire.

The stone that alleges to line-up with Lose Hill is also known by some of the more imaginitive as the Fairy Stone and there have been reports of strange lights and other phenomena reported around it.  I’ve been up here on probably a dozen occasions and never witnessed anything strange — but then I’m often accused of being closed-minded.  Another way of saying “non gullible” in my book!

Despite a footpath being marked on the OS map, there’s none I could find and the only way to get there is to make your way through the heather.  Park at the Wyming Brook nature reserve car park on Redmires road, take the signposted path besides the notice board and follow the line of the dry stone wall. Go through the gate and continue till you come to the end of the wall where a path leads off to your left through the broken wall, follow the path through the boggy bit and head uphill till you get to the highest point of the path by another wall with a path the other side.  From here it gets a little tricky! You’ll now need to go off path heading NNE and down hill till you come to the post-and-wire fencing where you should pick up a slight path heading WNW (your left) and head for the high point about half a mile in front of you. Just before you come to the high point you’ll have to cross the stream (easily done). The cist lays on the flat ground just beyond the brow of the rise. 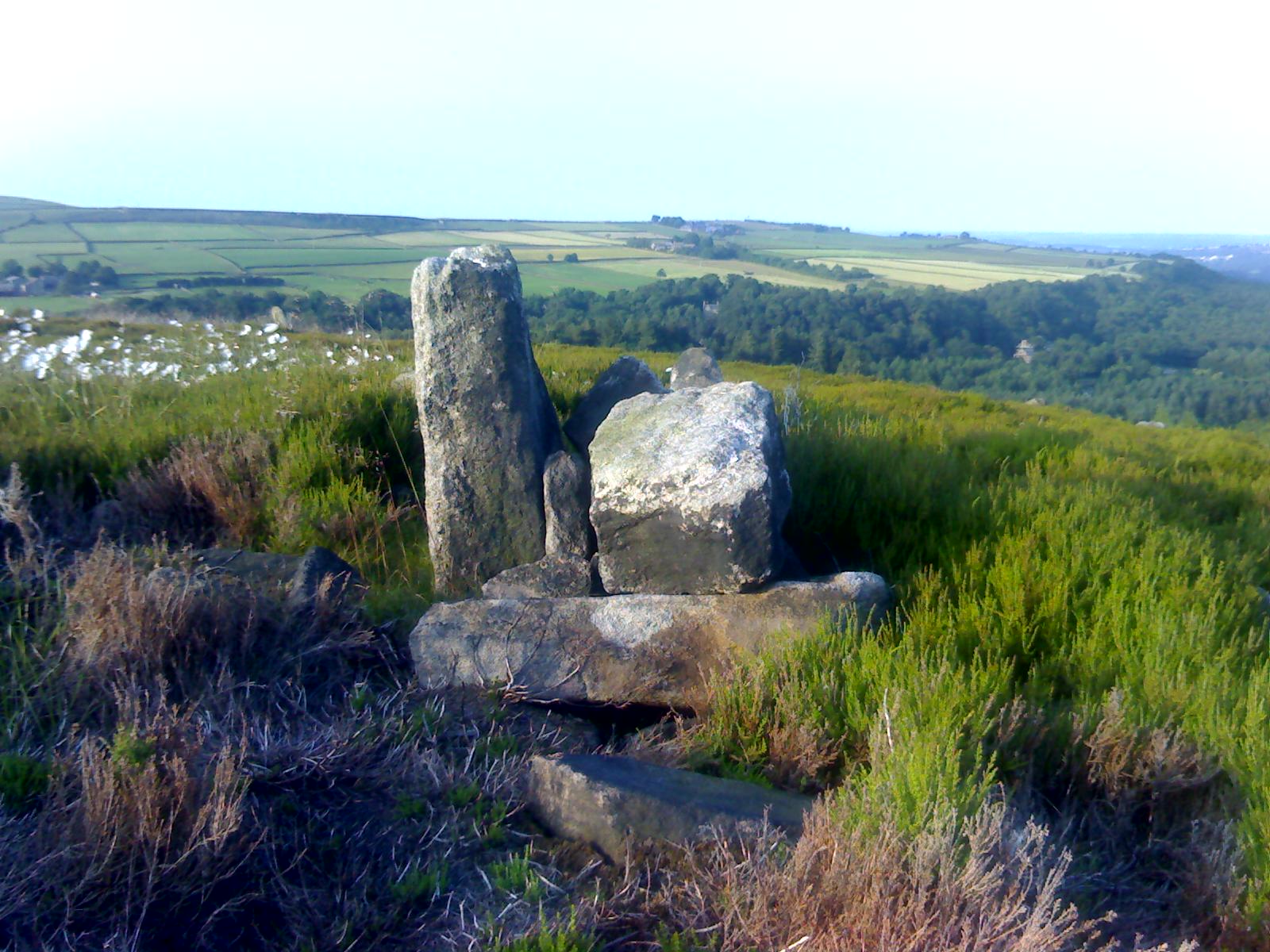 A long cist around 3 feet wide and 6 feet long in a well preserved condition aligned almost — but not quite — East/West on a prominent position on Hallam Moor, commanding views over Ash Cabin flat, Rivelin Valley and the A57 road.  The only restricted view is to the northwest, where the moor rises then drops down again towards the Headstone.

There are 3 side-stones still in situ: the largest around 1 metre tall, the others still in place being about 70cm.  The stones that would have made up the rest of the walls lay close by.

When you’re at the site it’s obvious why it’s in this location: the views are spectacular and afford excellent views of the surrounding area.  A burial site with a vista truly fit for a king!

Archaeologically there’s not much info kicking around that I can find and I’m indebted to Stubob for alerting me to it’s presence.  It’s very unlikely you’d be walking this area for any reason other than to visit the site, as there are decent paths across the moor to the most popular site in this area, the Headstone off to the North West.  Remains of the Ash Cabin Flat stone circle are about 750 yards southeast of here.

A real gem of a site and a “must see” if your in the area.

Follow Redmires road till you come to Wyming brook nature reserve and use the free parking facilities there.  From the car park you need the signposted path to the right of the notice board, the first one not the one by the metal barrier; climb the rocky steps and follow the line of the dry stone wall to your left, and after around 50 metres you’ll pass through a wooden gate.  You then continue following the wall as it heads downhill and the wall becomes broken.  Here you should notice a path that goes through the broken wall off to your left: don’t take it but continue another 50 metres or so, then turn 90° to your right facing the moorland.  The circle is around 50 metres into the heather.

A fairly well preserved late neolithic or early Bronze age embanked stone circle located in a sea of heather on Ash Cabin Flat on the Western outskirts of Sheffield and rediscovered in 1981 due to the moor being burnt back.

The site is oval in shape and around 9m x 7m diameter to the outer edge of the bank.  The banking is well preserved and shows there was no entrance to the interior.

There are around a dozen stones within and on top of the bank but it’s uncertain whether they are circle stones or packing stones from the bank.  English Heritage have recorded 5 of the stones, 2 still standing, as stones that once stood making up the circle.

If you visit any time soon (23/11/09) you’ll find the moor has been burnt back again giving an excellent view of the site, when the heather is in full flow it’s as high as the highest stones making not only finding the circle nigh on impossible to find but also defining the site very difficult.

Editor – 1.12.9. – Following a visit to this site in the company of Megadread recently, we found what appears to be a number of other cairns on the flat moorland plain around this seeming cairn-circle site.  There also appeared to be distinct evidence of ancient walling. Further archaeological evaluations are required here.