A fascinating site that was described in Johnston & Tullis (2003) local history work on the parish of Muckhart. Amidst an area bedevilled with faerie, boggarts, ghosts and historical shamanic moot sites we find more curious folklore pointing at a long forgotten site, whose age and precise nature remains a mystery.  Adjacent to the old boundary line, close to the meeting of streams, the Muckhart authors told that,

“an orchard above the old farmhouse to this day remains mainly untouched.  It was the burial site of warlocks from the parish and it is thought some may have even been burned at the Mill.  It has always been said that this ground should never be touched!  There is an ancient rubble bridge over the Hole Burn which has a Masonic Eye painted on it to ward off any unwelcome spirits.  Despite the eye, both the Farmhouse and the Millhouse have been home to many strange and ghostly manifestations.”

The folklore sounds to be a mix of archaic and medieval animistic traits: perhaps of a prehistoric cairn, visited and maintained by local people (as found throughout Britain) until the Burning Times, when christian fanatics arrived, debasing the cultural rites and murdering local innocent people.  …Perhaps not.

When Paul, Maggie and I explored the area a few days ago, we were greeted most cordially by the owner of Muckhart Mill, who knew of the folklore, but didn’t know the exact whereabout of the grave.  We couldn’t find any clues as to its exact location either.  Apart, perhaps, from the top of the hill immediately above the orchard where, alone and fenced off with an old covered (unnamed) well, a solitary Hawthorn tree stood.  We each recalled the aged relationship that Hawthorn has in witch-lore… but that’s as far as it went.  The grave remains hidden and may have been destroyed. If anyone discovers its whereabouts, please let us know so that a preservation order can be made to ensure its survival.

Close to the legendary old Wizard’s Stone we find there’s a real cluster of witch-lore in this small area to the north of Dollar, which deserves careful analysis from competent researchers and students.  Not only is there the legendary Lochy Launds of the Black Goddess hereby, there was also this curious rock, described by one ‘J.C.’  in an early edition of the Scottish Journal (1848), which told:

“On the confines of the parish of Dollar, not far from Hillfoot, the seat of John McArthur Moir, Esq., lies a glen, called Burngrens, watered by a small stream and planted with numerous large trees.  A great number of these, however, have fallen, during the last few years, beneath the unsparing axe; but strong, healthy saplings are rising rapidly to supply their place.

“In this glen there is a large stone, of peculiar formation, in every way like a cradle. It is currently believed by the superstitious in the vicinity, that the stone, every Hallowe’en night, is raised from its place, and suspended in the air by some unseen agency, while “Old Sandy,” snugly seated upon it, is swung backwards and forwards by his adherents, the witches, until daylight warns them to decamp.

The following rather curious affair is told in connection with the “Cradle:”

“One Hallowe’en night a young man, who had partaken somewhat freely of the intoxicating cup, boasted before a few of his companions that he would, unaccompanied, visit the stone. Providing himself with a bottle, to keep his courage up, he accordingly set out.  The distance not being great, he soon reached his destination.  After a lusty pull at the bottle, he sat down upon the “Cradle,” boldly determined to dispute the right of possession, should his Satanic majesty appear to claim his seat. Every rustle of a leaf, as the wind moaned through the glen, seemed to our hero as announcing the approach of the enemy, and occasioned another application to fortifying “bauld John Barleycorn.” Overpowered at last by repeated potations, our hero, dreaming of “Auld Nick,” and his cohort of “rigwuddie hags,” fell sound asleep upon the stone.

“His companions, who had followed him, now came forward. With much shouting and noise, they laid hold of him, one by the head and another by the feet, and carrying him, half-awake, to the burn, dipped him repeatedly, accompanying each immersion with terrific yells. The poor fellow, thinking a whole legion of devils were about him, was almost frightened to death, and roared for mercy so piteously that his tormentors thought proper to desist. No sooner had our hero gained his feet than he rushed up the glen, and ran home, resolving never to drink more, or attempt such a feat again. For many a long day he was ignorant who his tormentors really were.

“We stood upon the stone about a week ago. Ivy and moss are slowly mantling over it, a proof that it is some considerable time since the Devil has been rocked on it.”

Historian Angus Watson (1995) told the place to be “south of Wizard’s Stone…near Kelty Burn,” and also that,

“it is said to be where witches rock Satan to sleep on Halloween.”

Above here, the tree-topped rounded hill to the north was one of the meeting places of the witches of Fife, Perthshire and Clackmannan.  Something of sincere pre-christian ritual importance was undoubtedly enacted in this region as the sites of the Maiden are also a short distance due north. Does anyone know more about this fascinating sounding place?

From Dollar town centre, take the road up to the gorgeous Castle Campbell, but instead of turning up towards the castle, keep on the road, uphill, for another quarter-mile.  As the road begins to level out, a small field and driveway on your left heads up to Kiloran house. Stop here, and note the stone in the field, right by the fence alongside the footpath which runs uphill by the field-side up into the woods.  That’s the Wizard’s Stone.

This site doesn’t seem to be the remains of an authentic prehistoric standing stone (unlike the one along the same ridge a mile east at Castleton), but is more of a memorial rock relating to some witch traisl that occurred here several centuries ago.  By virtue of this, I felt it needed to be included on TNA.

Not listed by Canmore, the stone is found in an area with a rich cluster of heathen place-names—most intriguing of which is the ‘Lochy Launds’ woodland, right above where this Wizard’s Stone now rests.  The stone has been broken into smaller pieces in recent years—as the photos here show—and the small standing stone which remains is barely 3 feet tall at the edge of the field.

The local writer and historian Rennie McOwan (1989) told that it marked the spot where a warlock was burned in the 16th century.  Years later, a local land-owner called John Moir erected the stone here as a memorial to the event.  This was subsequently echoed by fellow local history writer Bruce Baillie (1998), when he wrote:

“A large whinstone in a field in a field is known as ‘The Wizard’s Stone’, having been set there by one of the Moirs to take the place of a rotting stake said to mark the spot where the last Dollar witch (and, naturally, the last Scots one), named Forrester, was burnt, though this is probably folk confusion with the vicar of Dollar, Thomas Forrest.”

Angus Watson (1995) could find no early references of this stone, other than it being mentioned in the 1860 Ordnance Survey Name Book.  Further information on the site would be most welcome.

Reputedly one of the haunts and gathering places of the witches of the area, this spot was also known as Lochyfaulds, which the place-name giant W.J. Watson (1926) tell us means the ‘place of the Black Goddess,’ like the “Valley of the Black Goddess” of Glen Lochay, 40 miles to the northwest of here near Killin.  Modern folklore ascribed the wizard here to have been Merlin—as highlighted in the adjacent place-name of “Merlin Park.” 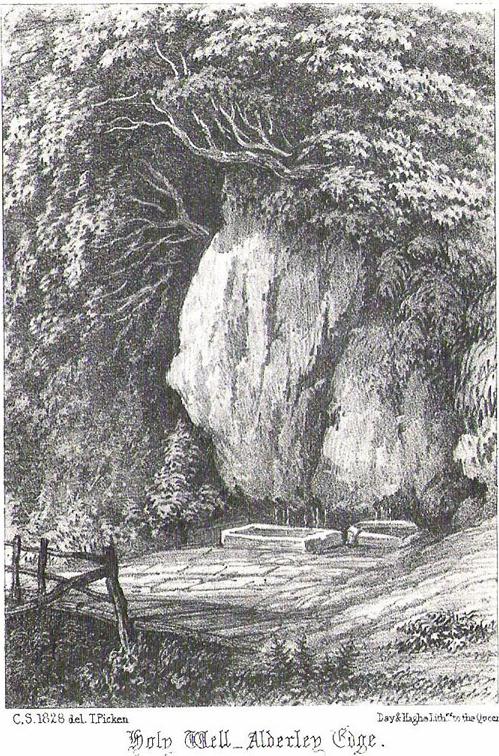