Unlike the Adam’s Well in Kent, deep daan saaaf, this northern site of the same name is not only long lost, but we can find no traditions relating it either—something of an oddity for these northern climes.  It could once be found in the open meadows east of Colinton, near where now the Redford Barracks exist and was a puzzle to the regional historian Stuart Harris (1996), who could find no early accounts of the site.  Although its name may relate to a local man called Adam, there are other examples of wells with this name from Kent to Scotland: the Kent example is deemed as an authentic holy well, whilst examples in Yorkshire and those in southern Scotland relate to the waters themselves being known as ‘Adam’s Ale’ or Adam’s Wine’—an old nickname for water itself! 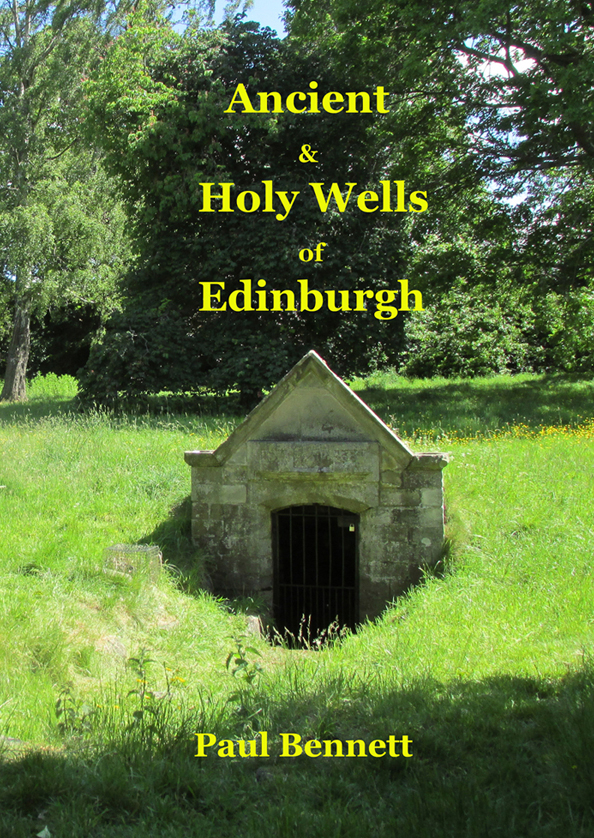 This is the first detailed guide ever written on the holy wells and healing springs in and around the ancient city of Edinburgh, Scotland. Written in a simple A-Z gazetteer style, nearly 70 individual sites are described, each with their grid-reference location, history, folklore and medicinal properties where known. Although a number them have long since fallen prey to the expanse of Industrialism, many sites can still be visited by the modern historian, pilgrim, christian, pagan or tourist.

The book opens with two introductory chapters: the first explores the origin and nature of holy wells and what they meant to local people in earlier centuries; and the next is a comparative overview of water cults worldwide. It is an invaluable guide for any student or tourist who wants to look beneath the modern history of the city and get a taste of the more archaic customs that once belonged here…

Highlighted on the earliest OS-map of 1855 and the Knox Map of 1816 in non-antiquated lettering as a ‘Standing Stone’, the Edinburgh historian Stuart Harris (1996) thought it was an authentic site.  He was probably right.  First named in land rentals in 1631, it was known by local people as the Clovenstone and used to stand in a park of the same name, before quarrying works extended into the area and destroyed it in the 1870s. Mr Harris thought that it may have been a pair of uprights, but the term ‘cloven’ could just as well mean it was a stone that had a split in it.

Not far from the giant cup-marked Caiy Stone, there used to be two very large prehistoric cairns, which local historian Daviid Shankie told us “were foolishly broken up by some sacriligious hand and used for road metal”!  Not good…  Remains of human bones and several fragments of old weapons were found in them.  Fred Coles (1903) told us that:

“In the neighbourhood of this [i.e. Morton Hall], but further southwest, on the grounds of Comiston, were found, in forming the public road, under large heaps of stones, various sepulchral stone enclosures, in which were deposited urns with dead men’s ashes, and divers warlike weapons.” And again, when speaking of the levelling of a part of the ground close to the old (so-called Roman) road, by Sir John Clerk of Pennycuick, the same writer adds, there ” were discovered several stone coffins with human bones.”

According to Shankie (1902), these two great cairns were built upon lands previously known as the Templelands of Swanston and commemorated a great battle that was fought “between the ancient Picts and Scots.”