Sometime in the 1940s, a certain Lady A. Fox recorded a cup-marked stone “in the vicinity of Pen-twyn” near Bargoed.  Its position in the landscape is a good one: on a geological promontory and overlooking the valley below.  The find was indexed by the Ordnance Survey, but apart from it’s grid-reference, all attempts to locate the design have so far proved unsuccessful.

It was mentioned briefly in the Royal Commission (1976) survey of Glamorgan, then subsequently listed in the surveys of Sharkey (2004) and Nash (2007), but none of them were able to locate it.  And hence, I post it here, in the hope that some local hunter will be able to recover it from its hiding place! 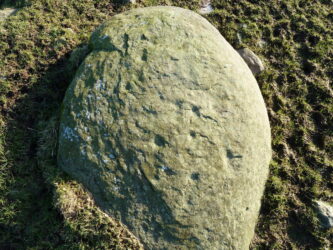 An interesting new cup-marked stone found by Paul Blades is this smooth rounded (female) stone that may originally have had some relationship with the tall standing stone of Careg Bica 160 yards to the south.  Around ten cup-marks are etched onto its surface, in a seemingly random arrangement (as usual!).  Although it seems to be an isolated carving, it’s likely that others will exist in the area.

The direction and proximity of the standing stone may have had some relationship with the carving.  In traditional northern hemisphere societies, the cardinal direction North is generally associated with darkness and death, primarily due to the fact that this is the area in the heavens where neither sun or moon ever appear; whilst South relates to life and positive natural associations due to it being the high point of the sun during the day. This animistic attribute existed till recently in the water-lore of northern England and Scotland where “south-running streams bore a high repute.”  Whilst such mythic attributes are well established, any cardinal relationship here is purely speculative.

Acknowledgements:  Huge thanks to Paul Blades for use of his photos in this site profile – and of course for finding the stone!

Described in 1925 in a report by the Royal Institute of South Wales as “the remains of a long barrow,” it seems that all remains of this old site have been destroyed.  Where the long tomb once stood are now some bungalows (anyone know if they’re haunted!?).

The tomb was quite an impressive one from all accounts: aligning north-northeast, it was some 20 yards long and 10 yards wide (at its widest), standing between 6-8 feet tall.  When building operations started here in 1959, a disturbed mound of stones was noticed, but by 1965 the bungalows had been built where once rested the ancient dead.

The field-name to its immediate east — Cae Bryn-y-garn — tells us the old name of the cairn, as known to local folk.  Quite what its folklore may have been, I’ve yet to hear…

From Gelligaer, take the northernern road up Heol Adam for 2-300 yards, where you’ll see a footpath on your left taking you into the fields. Walk up the path and as it crosses the wall and bends due east, you’ll see the boulder in the middle of the field. That’s it!

Across the road from Tir-y-Rhen is this singular flat boulder, measuring about 10ft x 6ft, with at least 33 full cup-markings etched on it. Described briefly in Chris Houlder’s (1974) Welsh Archaeological guide, then more recently in John Sharkey’s (2004) Welsh rock-art book where he told there to be perhaps another seventeen cups on its surface, the Royal Commission (1976) lads gave us the surity of definition in their survey of neolithic sites in the region. A kilometre north of Gelligaer, some 260m above sea level, we find this well-preserved carved rock:

“An approximately rectangular block…much weathered at at the corners…2.6m long NE-SW, by 1.7m wide, and about 0.6m thick.  The upper surface is covered with a haphazard series of 33 cup-marks varying from 40 to 115mm in diameter, and from 5 to 60mm deep… There are also 17 more cup-marks which are too weathered for precise measurement, but whose presence is certain.  Other may have been completely worn away.  Two more slabs of stone are just visible under the west corner of the main stone, suggesting the possibility that the cup-marks were made on the capstone of a cromlech, now collapsed.”

An earlier account by Wheeler (1925) described a number of lines or channels linking some cup-marks to each other, but these are now very difficult to see.  I’ll hopefully get some decent images of this carving sometime soon!