The Stone of Mannan

Take the A907 road between Alloa and Kincardine, and up the B910 into Clackmannan.  To get into the village, depending on which route you’re coming in, go up the Kirk Wynd or the Cattle Market—both of which lead you to the Main Street where, beneath the old clock tower, you’ll see the Market Cross and its companion erection just to the side. You can’t really miss it! 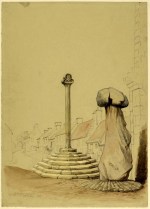 The history of this curious-looking giant phallic stone, sat quietly on the Main Street of sleepy Clackmannan village, isn’t as heathen as you’d expect when first seeing the huge upright—but there are mysteries and myths gathered about it.  The county of Clackmannan itself takes its name from this stone—but not the entire stone that we see today; merely the rounded, smaller element on top.  For it’s this that’s the real Mannan Stone. The rest of it, the tall upright pillar, was only attached to the smaller rounded stone—the Stone of Mannan— in the first-half of the 19th century.

First mentioned as a place-name in 12th century writings, the story of the stone was best told by Peter Miller (1889), who wrote:

“The old ‘clack’ or stone that forms the prefix to the name-word Clackmananmust be of considerable antiquity.  Its form and appearance have nothing to excite remark. The two larger portions of the stone are battened together with iron, and the portion forming the cleft appears to be detached from the larger one.  It is only the legend or tradition respecting its history and its association with the name-word Clackmanan that makes it interesting to the antiquary. Its dimensions are as follows: —It is over 3 feet in length, 2 in breadth, and about the same in thickness.  Its form is oval, and it has a deep cleft on its upper side.  The stone has nothing peculiar about it to indicate what it may have been originally, or the uses it was made to serve in early times.  There is no appearance of its ever having had an inscription or any ornamentation upon it.  It is simply a boulder-stone stone of whinstone, such as are found in abundance at the Abbey Craig near Cambuskenneth.  It was placed on the tall boulder slab on which it now stands, brought from the Abbey Craig in the year 1833 by the late Robert Bruce of Kennet, and the late Professor Fleming, who was then minister of the parish.  Previous to that time it lay on the ground alongside of the old jail and court-house of Clackmannan, close by the old cross of the town…” 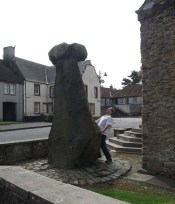 The old stone & its upright

Mr Miller then went on at some length to show the derivation of ‘Clackmannan’ to be from the old Irish, meaning “the stone of the monks.”  It seems a plausible theory too.  Despite this, Watson (1926) deemed it to be the ‘Stone of Manau’, being deemed vaguely as the people of the land north of the Forth.  The great Celtic scholar John Rhys (1888) declared Clackmannan to derive from the Irish deity or hero-figure, Manannan, as have other academic authorities since then.  But it’s all just a bit vague if we’re wanting ‘certainty’…

When T.C. Crouther (1936) wrote about this, he said how the Stone of Mannan had originally come from a position only a few hundred yards south of its present spot, at a place known as Lookabootye Brae  (NS 912 911), just above where the land begins to drop down closer to sea level.  This doesn’t seems too improbable.  Close to this spot could once be seen the sacred site of the Lady Well.

At the turn of the 21st century the stone was caged by the local council as it was beginning to crumble and was in danger of collapse; and so, the local council repaired the great upright and its sacred top-stone—albeit at the staggering cost of £160,000!!!  As the local people and other masons know to this day, the job could have been done for a fraction of that cost with equal efficiency.

Said by T.C. Crouther (1936), the local council, and others to have got its name from the sea god Mannan, other legends have grown around this fascinating old rock.  When Edwin Adams (1863) wrote about it, these were the tales that local people gave him:

“Its legendary history is curious. When King Robert Bruce was residing in Clackmannan tower, and before there was a town attached to that regal mansion, he happened, in passing one day near this way on a journey, to stop awhile at the stone and, on going away, left his glove upon it.  Not discovering his loss till he had proceeded about half-a-mile towards the south, he desired his servant to go back to the clack (for King Robert seems to have usually spoken his native Carrick Gaelic), and bring his mannan, or glove. The servant said, ‘If ye’ll just look about ye here, I’ll be back wi’t directly,’ and accordingly soon returned with the missing article.

£From this trivial circumstance arose the name of the town which was subsequently reared about the stone, as also that of a farm at which the King stopped, about half-a-mile from the south, on the way to Kincardine, which took its name from what the servant said, namely, ‘Look about ye,’ and is so called to this day.”

But as the various dates in this tale simply don’t add up, it seems that the writer had been easily fooled.

Acknowledgements:  Big thanks to author Marion Grace Woolley for use of her photo in this site profile. 🙂