Whether you take the road west from Fortingall, or over the heights from Loch Tay, when you reach Meggernie Castle just keep going west for a few more miles.  Keep going past the large Stronuich reservoir on your left and you’re getting close.  Go past Caisteal Mhic Neill and the trees at Cashlie House for another 5-600 yards and where the track crosses the river Lyon, park up just past it.  Ahead of you in the field on the left of the road, nearer the riverside, is where you need to look.

The mound & its small stone

One of the most peculiar and unique sites in the British Isles is this remote small upright stone, known locally as The Bhacain.  Standing upon a small mound in the field immediately east of one of Finn’s legendary ‘forts’ (a dun or a broch) called Caisteal Cona Bhacain, this curious monolith, less than two feet tall, has a thin upright stem with a much enlarged rounded end to it.  Some might even ascribe it as phallic—although local traditions of the stone relate it as a truth-sayer of a young girl’s virginity!

Its position on top of the small mound is intriguing, giving it the impression of being atop of a tumulus; and there is also the scatter of small stones surrounding the upright just beneath the surface (as evidenced in one of the photos), making it possible that the stone is an ancient burial marker.  If this is ever shown to be true, the likelihood is that the stone marks the grave of a hound, as the tradition of this spot implies.  No excavation has ever occurred here, so the precise nature of the stone (and the mound) has yet to be ascertained; but knowing the longevity of some oral traditions in these Highland glens, the idea of it being the burial-place of a dog is anything but far-fetched. 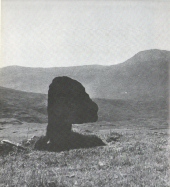 The Bhacain & its stony pile

If the stone is contemporaneous with the associated ‘duns’ close by, this would be a late standing stone, probably erected in the Iron Age.  We can certainly see, quite plainly from the erosion on the stone, that this is not neolithic or Bronze Age in origin.  A decent examination of the important sites hereby is long overdue…

The folklore and traditions attached to this site are numerous when you consider how small it is.  Much of this relates to the fact that animistic cosmologies in the Highlands were retained until very recently, stretching way back.  Accounts from the 19th and 20th centuries tell of people still frequenting this and other sites, at sunrise, or full moons, as such things were still very much integral parts of rural life.  When the local historian Duncan Fraser (1973) wrote about The Bhacain in his fine work on this area, he told much about the traditions of the great warrior King Fionn and his activities hereby:

“Another traditional link with the warrior King is the Bhacain, on a mound beside the road, far up the glen.  Only a stone’s throw from one of the forts, it is about two feet high and shaped like the head of a dog.  This is said to have been the stake to which the Fians tethered their staghounds with leather thongs, when they returned from the chase.  And there were times, no doubt, when Fionn’s own dog, Bran was among them, with its yellow paws and its black flanks and its chain of pure gold.  It was the best hunting dog that ever lived.  And there was its brother, the dreaded Grey Hound, that used to roam on its own in the Great Glen, tearing its victims limb from limb, until it too abandoned its wildness and became one of the hounds of the Fians.  They say that the dogs’ food was thrown to them from the top of Caisteal Coin-a-bhacain, the castle of the dog’s stake, upwards of seventy yards to the west.  And any dog that failed to catch its supper was turned out of the pack.

“Time did not allow the Bhacain to become inanimate like other stones.  Even in comparatively recent times it was still regarded with superstitious awe.  A retired schoolmaster of Fortingall recorded eighty years ago that it was said to have a mysterious effect on those who crept under its head.  And old folk in the glen will tell you that those who did so were girls.  It had become the glen folk’s yardstick of virginity.  In the late eighteenth century, when the girls returned from gathering the harvest in the ungodly Lowlands, under the stone they went.  It was better than all your modern pills.”

In Hilary Wheater’s (1981) fine work on the history of the region, he told that “no youth was permitted into the fighting body of the Clan until he could lift the Bodach Stone onto the boulder beside it.”  This tradition gave the Bhacain another name, the Testing Stone of the Fianna.