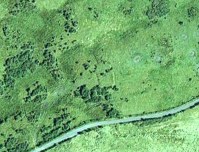 Aerial view of the oval, at centre

Take the B954 north out of the Alyth, up through the hills.  After just over 2 miles (3km), take the left turn up to Bamff.  Go along here and past the copse of trees on your right for literally three-quarters of a mile (1.2km), where a gate takes you into the overgrown meadows on your right.  Walk back on yourself for about 100 yards or more, across the boggy stream and up the slope.  The embankments of this enclosure are right under nose!

Some 70 yards west of the little four-poster ‘stone circle’ of Shealwalls, is this previously unrecorded enclosure.  Oval in shape and well-defined at ground level, the great majority of the inside of this enclosure is relatively even and flat.  Around its perimeter there are, at intervals, a number of small stones defining its edges along its internal embankment, but these are intermittent and seem to have no deliberate architectural regularity: they may simply be elements of an internal raised platform that have become visible due to erosion processes.

At its greatest width from the edges of the outer ditch to outer ditch, the enclosure measures more than 22 yards (20.3m) east-west, and at its longest it is 30 yards (27.3m) north-south.  The circumference of the enclosure is between 88-89 yards (80m).  The average width of the surrounding or enclosing ‘ditch’ is between 2 and 2½ yards (2m) and it has a depth of no more than 2 feet all round.  All along the southern side, very little remains of the ditch and in sections it has been eaten into by foraging rabbits and cattle.  The most conspicuous section of the surrounding ditch and embankment is along the eastern length (where it gives the impression of being hengi-form in nature); the more rounded northern section of the ditch is very distinct, but is overgrown in Juncus reeds; whilst the western section of the ditch is clear until reaching its southernmost part, where its outer edges become less visible.

There seemed to be no visible structures within the enclosure itself, which added to my thoughts that the site was hengi-form in nature, as defined in the surveys by A.F. Harding (1987) and Jan Harding (2006).  However, it is best to maintain a simple description regarding the nature of the site until archaeological evaluation can give us a more accurate assessment.  Without excavation it is obviously impossible to give an accurate idea of its age, but its architectural form and similarity with other enclosures would seem to place its construction in the late Bronze Age to early Iron Age period.

The monument proved very difficult to photograph with any success as it is much overgrown and the bright sun was in the wrong place! (serious) So, another visit is needed in the hope that we can get better images.  A fascinating little site!

Get an email every time a new site profile is added