Take the Calverton Road out of Stoney Statford, then take the left hand road to Calverton and look for layby on the right near a copse.

Gorrick’s spring is an interesting site and perhaps the best of the county’s holy wells. The water flows from a rather worn lion’s head beneath a stone arch under the steps, and pours into a stone lined chamber repaired with concrete slabs. It is reached by a series of steps from the layby and beside the spring is a narrow and as Rattue (2003) states an uncomfortable seat.

It is unclear where the name comes from but a local legend tells how a witch’s pupil gave the sight back to a Gypsy tinker. A rhyme states in Romance around Stoney Stratford quoted by Rattue (2003):

Interestingly it did run dry in 1996 as noted in the local Herald of 8th November 1996:

“It’s a mystery,” confessed Calverton resident Lucinda Lourie. She said she realised water levels were currently low, but older residents of the village remembered the spring running through the drought of 1976. She said one wag at Anglian Water had suggested the source of the spring may have been a burst pipe which the Anglian Water work had cured – unlikely since the spring is reputed to have been used by monks in the 13th century!” 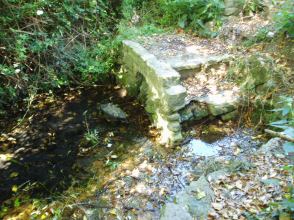 An author named Bartley (1928) mentioned by Rattue (2003) in his Holy Wells of Buckinghamshire notes:

“the monks of old….deemed the delicious waters of this wayside spring as sacred, possessing healing properties for all humans. Daily the holy Friar would hie to the mossy bank and reach the water with his ancient pitcher, and bear it homeward to his suffering flock”

As Rattue (2003) notes it appears unlikely that a friar would have visited the site as there  is no record of any religious institutions connected with the site.